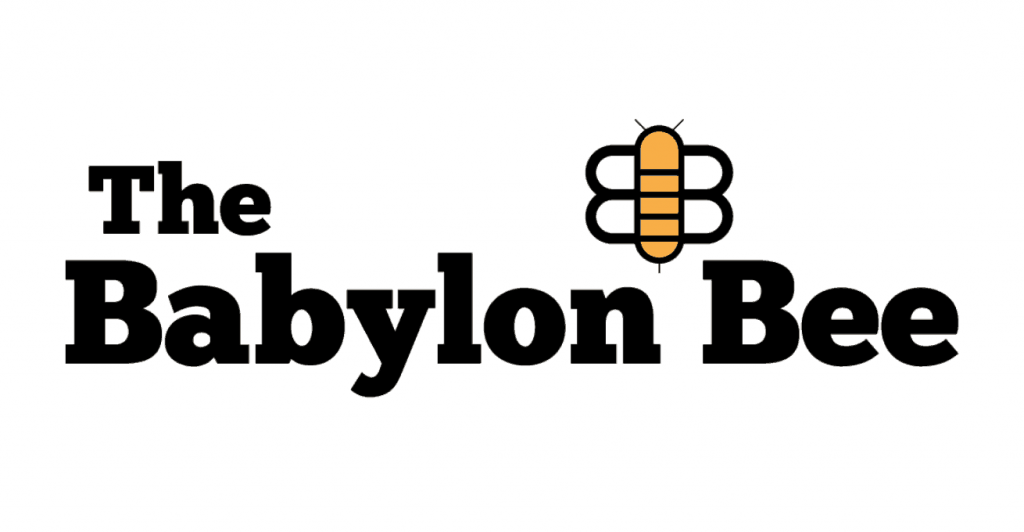 I have liked The Babylon Bee for a long time.

For those not familiar, The Babylon Bee is a Christian satire website, modeled after The Onion.

I love the articles making fun of Arminian theology.

And I love the articles making fun of Calvinists.

I love that it makes fun of fog machines used during worship sets.

It makes fun of Joel Osteen regularly, as well as the Jesus Calling book, The Purpose Driven Life, and Tim Tebow.  Often with really sound, corrective theology woven in to the satire. It’s a website that makes fun of things, that’s understood. You might have a problem with that, I don’t. It’s not the New York Times making fun of something, it’s The Babylon Bee.  I’d be honored if the Bee made fun of me someday.  That’d be a more meaningful “you’ve arrived” moment that the elusive blue check mark on Twitter.

Most of us are accustomed to the polarized dichotomy that dominates the political landscape today. You state where you stand on issues like abortion, gender, sexuality, refugees, immigrants, police brutality, and of course, Donald Trump.  Grenades are then lobbed back and forth and carnage ensues.  No one is ever wrong because they always have their online tribe there to pat them on the back.

For a while, it seemed like the Bee made a concerted effort to transcend the juvenile nature of these debates. For every article I saw that had a Republican bent to it, there was another one making fun of Donald Trump or supporting a traditionally Democrat issue like immigration reform.  The Bee was stinging both sides, as it should be.

But recently the Bee is getting sucked into the juvenile grenade tossing, using its satire as a means of patting its own tribe on the back (and getting all those likes are shares from their tribe) rather than using it as the transcending and corrective voice it can be. And the sporadic posts making fun of Trump or the wall can no longer rationalize this trajectory.

While there are still the genuinely funny posts about how church youth groups are the only ones keeping the laser tag industry in business, I’m seeing a disturbing trend in the approach behind articles addressing race, gender, and sexuality:

…there’s a hetero member of the patriarchy who wants to jump off a bridge.

Keep fighting the good fight, because we’re moving toward a better world. Case in point: this person is heterosexual, Caucasian, male, cisgender, able-bodied, and wishes he had never been born.

excerpt from PROGRESS: This Straight White Male Hates Himself

These articles just make me sad. Not because of the point they are trying to make against progressives, but because of how insular they are. They are the same knee jerk reactions you’d expect to see on any random opinion website run by non-Christians. I’m sad because the Bee attaches Jesus to its views, so now non-Christians have even more fuel to think the Church is unloving and unjust. The Body of Christ is broad and diverse, and these perspectives are anything but.

There are valid concerns within the movement for women’s equality and rights.  Very valid concerns.  Sit down and listen to a woman and hear for yourself.  It doesn’t mean that the “far left” or whatever you want to call it is right about everything, but to throw the whole topic out as utterly ridiculous is reckless and unloving.  The articles don’t feel like you’re making fun of the political topic, they feel like you’re making fun of women.  It’s like telling women who have been abused and overlooked that they don’t matter, all in the name of Christ.

A friend of mine is gay. He grew up in the Church. He told me one of the greatest problems is our definition of masculinity is all about football, cars, and being macho. Because this is our definition of masculinity, if you don’t fit this, you’re looked at as less than a man. Being treated like less than a man contributed to my friend’s gay identity, as there wasn’t a definition of Christian masculinity given to him in the church that fit him. King David danced, wrote poetry, and played the harp, things that culture and the Church today would not identify as masculine. This isn’t to say there aren’t things that are masculine or feminine, but the solution isn’t to regress back to blind grenade throwing, trying to fight fire with fire.

Or to deny the existence of white privilege. Is the topic always addressed tactfully from “the other side”? No. So is that an excuse to not handle it tactfully in response? The Bee thinks so. How does this help? Obviously white privilege is real (and needs to be understood properly) and is a contributor to the incredible systemic sin that divides America and the Church. So instead of being in loving community in a way that brings redemption and constructive solutions to those who don’t share this privilege, let’s just make fun of them instead.

I have no doubt these posts have increased the Bee‘s readership. This tribe loves to post these sorts of articles that pat their views on the back. But if the increase in readership is exclusively Republican white males, hasn’t the mission failed?  At that point, you’ve just become another resounding gong and clanging cymbal in a world already full of arrogant, insular noise.

Follow me
Noah Filipiak
Small Groups & Young Adult Pastor at Ada Bible Church
After 13 years of urban church planting, Noah is now prepping for a PhD in Old Testament / Ancient Near East history and is on the pastor team at Ada Bible Church.He is:
Author of Beyond the Battle: A man's guide to his identity in Christ in an oversexualized world
Host of the The Flip Side Podcast
Join an online men's small group led by Noah and team at BeyondTheBattle.net

The Scariness of Religious Power in the Hobby Lobby Abortion Case
Choose this day whom you will serve: The Republicans, The Democrats, or Jesus
Both sides of the Arizona "Anti-Gay" Bill SB1062
Ben Carson is right about Islam, Congressman André Carson is wrong
A Solution to the Kim Davis Debacle, and the Many More that Will Follow