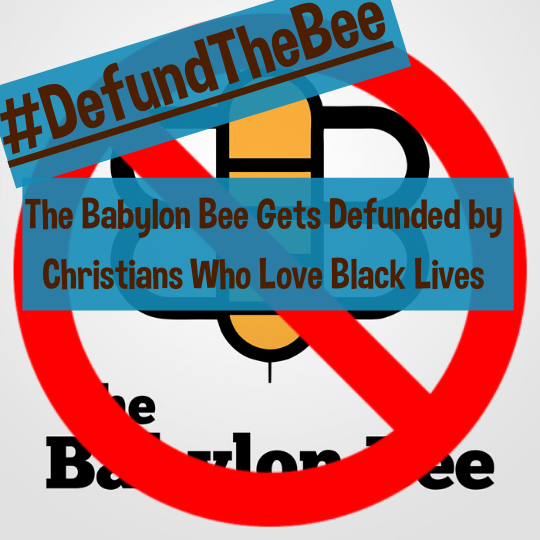 MINNEAPOLIS, MN – Defunding is all the rage these days. After consistently mocking the concern for black lives, Christians finally rallied their efforts to defund The Babylon Bee, a popular satire website ran by politically conservative white guys who use a lot of words from the Bible.

The Bee made its name years ago with genuinely funny articles poking fun at the quirks of being Calvinist or Baptist, repetitious Chris Tomlin choruses, and smoke machines used in worship sets. As previously reported by the Pulitzer-Prize winning Filipiak Flea, somewhere along the way The Bee transitioned into mocking oppressed and minority groups like women, people of color, and the LGBTQ community and drinking the dangerous cocktail of Christianity and politics as one in the same. Some thought this award-winning exposé by The Flea would be enough to turn those who follow Jesus away from supporting The Bee‘s resentment of the people Jesus would be spending most of his time with today. But a recent visit to The Babylon Bee’s articles that mock the plight of black lives shows otherwise.

You’ll still find the random funny article that doesn’t mock oppressed people sprinkled in to the list of options, as if to say, “Look we’re still the good old Babylon Bee you started following in 2016…(And hey, making fun of black people is no different than making fun of Calvinism, right!?)”

But some Christians began noticing the change and became confused that The Bee calls themselves a “Christian” news website. Will Bird, a random white guy from Minneapolis who loves Jesus and black lives, started questioning why he followed The Babylon Bee on social media. “I love Jesus. I love black lives. Jesus clearly loves black lives. I wonder why The Babylon Bee doesn’t,” Bird said. And that simple logic is what began Bird’s #DefundTheBee campaign.

Knowing that online companies receive their ad revenue based on web traffic and their amount of social media followers, Bird unfollowed The Babylon Bee on all of his social media accounts, stopped visiting their website, and thinks other followers of the Jesus in the Bible will want to do the same. “It was really difficult at first,” Bird confessed, “and I backslid quite a bit. I at first said I just wouldn’t read The Bee‘s racist articles, but I’d read the other ones. Their articles that make fun of the rapture are so funny, I just wasn’t ready to ‘surrender all,’ you know? But then I realized this was lukewarm faith and that even my clicks on their non-racist articles still supported their existence as a racist website, so I had to give it up altogether.”

Bird now uses Covenant Eyes to help him avoid visiting The Bee in moments of weakness.

The #DefundTheBee campaign is a serious campaign meant to communicate to The Babylon Bee and the watching world that Jesus-followers are for black lives and against racism and will not support websites that mock the plight of black people in Jesus name, no matter how funny said website might be. To participate in Bird’s campaign, do the following:

Endnote from the author:

Hi everyone, it’s Noah. I wrote this article in the satire genre that the Babylon Bee writes their articles in, as a way to give them a taste of their own medicine so to speak. Saying something that I think is true, but under the cloak of satire. The message of this article is true, while the details are fictional and meant as humor. The bullet points at the end are all from me. I would sincerely encourage you to join me in boycotting the Babylon Bee and helping others do the same, for all the reasons I mentioned in the article above. I am tired of their racist articles done in Jesus name and I think you should be too. Let me know if you have any questions. Sincerely, -Noah Filipiak

FINAL EPISODE: Noah's new job, pornography, Does God hate people?
Episode 3: our trending topic of #TerenceCrutcher's death in Tulsa police shooting takes over the ep...
Why there is unique outrage when an unarmed black man is shot and killed #AhmaudArbery
Racism Check: Not All Muslims Are Christian Crucifying Killers
Weeping for Orphans. Where is the Church? Where are you? Where am I?