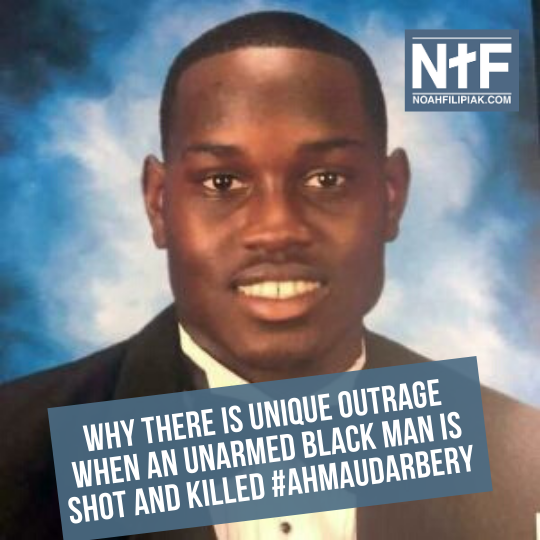 A personal friend recently asked an honest question on social media in response to the shooting of Ahmaud Arbery: I hate these meaningless killings…(but) why does it seem like when black men kill white men it’s not as big of a deal?

I’m thankful for my friend who asked this question. It’s so important to be humble and seek constructive conversation, with a heart to learn, when approaching such polarizing subjects as racism, which I appreciate about my friend. I felt like it was a good question whose answer would help bring clarity to people out there who might not understand why stories like Ahmaud’s go viral. So I hope this blog article is helpful in giving some context. I hope it’s done in a non-judgmental way and in a way that people of all skin colors and cultures will find approachable and helpful. I hope it can bring some transformation to individuals and to our country.

There are two answers to my friend’s question, and they are related. The primary answer is that the outrage about a death like Ahmaud’s is not necessary about his death itself (though certainly tragic, and worthy of outrage), it is that the shooters were not going to face criminal charges. (They are now, likely due to the protests and petitions) In many of the trending cases of unarmed black men being shot and killed over the past few years, the shooter either wasn’t going to face charges at all, or they were acquitted of all charges once they got to court. Without getting into the details of each of these unique and complex cases, I hope it’s helpful to you as a reader to see this difference. The reason there isn’t outrage when a white man is killed by black men is that those black men are typically prosecuted and convicted.

It would be terrifying to live in a country where a white person could randomly kill a black person and have no legal repercussions for it. I’m not saying that’s always the state of our country today, I’m saying I think we all would agree that would be a terrifying country to live in if you were black.

That ties into the second answer to my friend’s question, and that is our recent history as a country. During the Civil Rights Movement, that was the state of our nation, particularly in the South (note that Ahmaud was killed in Georgia). Throughout the 50’s and 60’s, when the Beatles and Elvis Presley were in their heyday, it was commonplace in the South for blacks to be killed at random by whites and then for the whites to not face any criminal charges. Police officers, judges, and even pastors often participated in these killings and lynchings, let alone the members of a jury, so a black person was unlikely to find much help from those sources. I’m not saying every judge, police officer, or pastor was this way, but you can imagine this environment where so many were that it would make it impossible to trust any of them with you or your children’s lives. The Southern Poverty Law Center lists out some of the Civil Rights martyrs here. Take some time and read through them and see if you can track how many of their killers were found innocent or where the case never went to trial at all. A famous example of such a pattern was the murder of 14-year-old Emmett Till:

Till’s family courageously decided to have an open casket for Emmett’s funeral where his disfigured face was seen by all, exposing the brutality of injustice and white hate in the South. Viewer discretion is strongly cautioned but if you want a taste of this reality, you can view the photo here.

The National Memorial for Peace and Justice, informally known as the National Lynching Memorial, opened in 2018 in Montgomery, Alabama. It reports that more than 4400 African American men, women, and children were hanged, burned alive, shot, drowned, and beaten to death by white mobs between 1877 and 1950. None of these deaths would have been prosecuted.

So the reason there is unique outrage when an unarmed black man like Ahmaud Arbery is shot in cold blood, and the death is not treated as a homicide, is because we’ve seen this so many times before.

I saw another helpful line on a social media thread around Arbery’s death, particularly in this age of sensationalized news and lack of civil discourse between polarized political sides: My motto these days is curiosity before conclusions.

I agree with this, and we need to learn from these past few years. Both sides need to do their due diligence to try to find out what actually happened before retweeting or posting the new hashtag on social media. I’ll show my cards and say I was rattled by the conflicting accounts of what happened in Michael Brown’s 2014 death in Ferguson, MO, after getting caught up in the initial “Hands up, don’t shoot” account. It’s easy to read those eyewitness accounts and “vote” for the ones you think are true, which doesn’t help with whatever actually happened. All we can tell from all of those accounts is that whatever happened wasn’t as clear cut as either side tried making it out to be. I bring up this tender topic in an effort to bring a rare attempt at objectivity within these discussions. I bring it up to say, whichever side you’re on, we need to come toward one another if we want to move forward in community.

So with Ahmaud Arbery’s death, I wanted to do my research (curiosity, per the above motto) before I drew my conclusions. In Michael Brown’s death, there was no video, so we are left with conflicting eyewitness accounts. In Ahmaud Arbery’s death, I was shocked and disturbed to find there is a video. It looks like the car that was following the shooters began to pick up what was happening and started filming while trailing behind the situation. I strongly caution you to consider if you want to watch this video or not. It is a man getting shot in real time, bleeding out, and dropping to the ground. It is not an image that will not leave your mind quickly, but it is here for those who feel led to watch it.

After watching this sickening video, it is hard to see any scenario where this sort of shooting would be justified or legal. (And yes, the point needs to be made there shouldn’t need to be a video in order for an unarmed black man’s death at the hands of armed white men to be brought to trial)

Even if these men thought they saw Arbery commit a burglary, as they claim, no one should think this would allow you to chase that unarmed person down and shoot them.

In this petition from Change.org, it explains that the shooters are a retired police officer and his son and infers that this was the reason that Arbery’s death was not being addressed as a homicide or taken as seriously as it should be. This is the reason for the outrage. And it’s important to note, much like Martin Luther King’s efforts in an era before us, that the outrage brought about these two men being arrested and taken into custody, where they will now stand trial for what they did.

It’s not only important so that Arbery and his family can see justice, it’s important for our entire country. This might be a difficult statement for some readers to digest, but our country is a scary place to live for black people. I’ll just give you two examples from personal friends of mine that happened within the last few weeks.

One is a black pastor friend of mine who lives in Detroit. As he reflected on Arbery’s death on Facebook, he wrote this within his post: I was reminded where I stand when I was pulled over by a white police officer a month ago. He attempted to open my car door with his hand on his weapon during a routine traffic stop, while assuring me that this was “routine procedure.”

Another friend is a black man who was a part of the church I pastored in Lansing for 13 years. He recently posted a video on Facebook Live after feeling like his life was in danger by some white men who were intimidating him at a gas station. He had stopped for some food after Uber driving. They pulled up behind him, staring at him, then circled around him, then parked next to him, staring at him further.

These are terrifying situations where my black friends literally don’t know if they will end up as the next hashtag. This is a daily experience of trauma for black Americans, always wondering if they will be next. It’s not that they are scared of all white people or all police officers, it’s that they know the harassers and killers are out there, walking among us. And they are unsure if they live in a country that cares or a judicial system that will act, giving their potential attackers little reason for pause. When the news of Ahmaud Arbery’s death hits their newsfeed, they instantly know that could have been them, or one of their kids. This is very real for them.

For white Christians and the white Church, if we at all desire to be diverse in our makeup or to obey the Bible’s mandates for justice and for standing up for the oppressed (Micah 6:6-8, Isaiah 1:11-17, Amos 5:21-24, Luke 4:18-19, Matthew 12:18-21, Matthew 23:23), we have to (at minimum) acknowledge and honor the daily traumatic experiences of our black brothers and sisters. Expressing outrage at Ahmaud Arbery’s death and the lack of criminal charges on the shooters is one small way of doing that. It’s one small way of telling our friends of color that we support them and are not okay with the injustices they endure, and that they can come to us in Christian community, and we can be the Body of Christ together, supporting one another like the family we are.

Rising above the Trayvon Martin / George Zimmerman arguments
Dennis Hammond - Episode 20 - on being raised in inner city Lansing, finding Christ and going to Hon...
Podcast Interview with Youth Pastor David Singleton on Race, Urban Ministry
How to overcome our racial biases? Walk boldly toward them.
In a "one race," "color blind" world, Simone Manuel's gold medal would be the same as any other