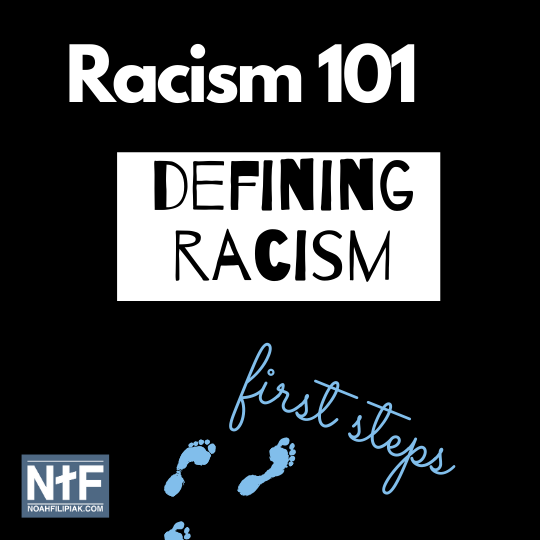 You’ve made your social media posts about George Floyd.

You may have even attended a rally or protest.

What will you do now?

Many won’t do anything. Time will go on, the protests and riots will stop, the momentum will fade. George Floyd will no longer dominate the headlines. White people will move on with their lives until the next hashtag comes along and the cycle will continue. Don’t let that be you.

Others are ready to solve racism now. Let me first say, I love this zeal. I am not mocking your ideals as I hear some do. I love this and want to fan this flame. But I also want to give a word of caution, and this is where this blog post comes in:

Don’t try to do surgery when you’ve never gone to med school.

The first step to “solving racism” is to become educated about what racism even is. I hope to provide some really basic concepts for that here. And we can’t “solve” racism, but we can work on dismantling it. You can be on the side of the dismantlers rather than the perpetuators. But I’m already getting ahead of myself. This is going to be a very basic first step to understanding racism.

Most white people would define racism as a negative or derogatory feeling an individual feels towards a person based on their skin color. A lot of this is semantics and is why it’s so hard to make progress or get on the same page, but let’s stop using “racism” as the word for this. Let’s call this “prejudice.” You might be prejudiced toward people with long hair, punk rock pink hair, heavy people, thin people, people who live in the country, people who live in the city, and Ohio State fans, to name a few examples. Or people with black skin or white skin. Prejudice is not good and we should be against it!

It’s the difference between being nice to a slave and abolishing slavery. Both are good, but they are two very different things.

Individualized racism or prejudice is when a white person calls a black person the “N” word. It’s the KKK. It’s being mean to someone based on their color. Most people in white society would say they are not racist, based on this definition. When we see former Minneapolis police officer Derek Chauvin kneeling with his knee on George Floyd’s neck, suffocating him to death, we say “He is racist! Racism is wrong!” In part we are right. But what we really mean is “That is individualized racism! That is prejudice at its worst! That is wrong!” It’s what allows us to call Derek Chauvin and cops like him “bad apples” and in doing so never have to talk about the larger issue of police brutality, which is a systemic issue. This blog article is not about police brutality. I know that’s a trigger word for some and I want you to hang in there with me. There are a lot of good police officers out there and I’m not villianizing them. I also have empathy for how hard and complex their job is. I’m just using police brutality & the individual example of Derek Chauvin as my first teaching illustration to help us understand the difference in definitions of how we use the word “racism.”

When you hear organizations or individuals calling out racism and lamenting the death of George Floyd, but not calling out police brutality, you are seeing individualized racism be spoken out against, but not systemic racism. So in this individualized mindset, the white person or organization thinks that black people are protesting and rioting for two reasons: George Floyd’s death and the racism of Derek Chauvin.

As tragic as George Floyd’s death is and as heinous as Derek Chauvin’s racism is, these are not the primary reasons for the protest.

The protesting is about a national justice system that has a long track record of not applying judicial consequences when police officers kill unarmed black people. Historically this has given officers a sense of freedom to do what they want toward blacks, without fear of criminal consequences.

(I write about that history here)

Do you see the difference?

I highly recommend watching the 29-minute version of the above video if you have time. It’s one of the best teachings on systemic racism in a condensed format that I have ever seen. I am not hyperbolizing, I think this video will change your life and how you see the world:

RACE – THE POWER OF AN ILLUSION: How the Racial Wealth Gap Was Created from California Newsreel on Vimeo.

Do you remember what the white salesman told the black gentleman who was interested in buying a home? “It’s not me, ” the salesman said, “but the owners of this development have not decided to sell these homes to Negroes.” In other words, “Look my black friend, I’m not racist. I like you. I’d go out to lunch with you. I don’t have any mean feelings toward you. But this neighborhood development, and in fact the laws of the United States of America at the time, will not let me offer you this mortgage to purchase this home.”

That man was not individually racist or prejudiced, but he certainly was complicit within a racist system. Complicit in perpetuating it, as well as certainly benefiting from it.

Redlining is only one of many examples of systemic racism. Police brutality is another. But for now I just want to you to ask yourself if you’ve ever thought about racism as systemic. As something, like redlining laws, that is built into the fabric of our country that has created the inequalities (based on skin color) that we see in our country today.

The last piece to defining racism is that it must involve power. Congregations Organizing for Racial Reconciliation defines racism as:

So in the redlining example from the video, white people were personally prejudiced toward black people, so they didn’t want to live near them. White people also had the societal power to actually do something about this. They misused their power to created a systemically racist and unjust housing system. Black people could have felt an equally strong amount of racial prejudice toward white people, but did not have the power to do anything detrimental to white people’s housing and economic situation. Blacks were in fact powerless to do anything about the housing situation and how it crippled them from amassing wealth equity.

Power is what turns prejudice (individualized racism) into (systemic) racism.

What we have to do is stand up against and dismantle systemic racism, which is much harder because we (whites like myself) benefit from it every day and are complicit in its perpetuation in our society. How do we do this dismantling? We’re not quite ready to dive into that yet after Racism 101 🙂 — for now, take the passion you feel about George Floyd’s death and the injustices you are seeing and make the commitment to dive into the rabbit hole.

Don’t try to do surgery when you’ve never gone to med school.

Don’t be lazy and make your friends of color teach you. You can learn a lot of this stuff on your own and be a much more interesting conversation partner later for your friends of color! Listed below are a ton of resources for you to choose from. I have not read or watched them all.

Race: the Power of Illusion

When They See Us

Eyes on the Prize (PBS)

The New Jim Crow: Mass Incarceration in the Age of Colorblindness

I’m Still Here: Black Dignity in a World Made for Whiteness

Between the World and Me

White Fragility: Why It’s So Hard for White People to Talk about Racism

Harvest of Empire: A History of Latinos in America

White Awake: An Honest Look at What it Means to be White

The Myth of Equality: Uncovering the Roots of Injustice and Privilege

Divide By Faith: Evangelical Religion and the Problem of Race in America

Stamped from the Beginning: the Definitive History of Racist Ideas in America

Waking Up White and Finding Myself in the Story of Race

Why Are All the Black Kids Sitting Together in the Cafeteria?

The Color of Compromise: the Truth about the American Church’s Complicity in Racism

The Warmth of Other Suns: The Epic Story of America’s Great Migration

How to be Antiracist

Rediscipling the White Church: From Cheap Diversity to True Solidarity

Episode 3: our trending topic of #TerenceCrutcher's death in Tulsa police shooting takes over the ep...
From the Gospels: trending Bible verses on money, the poor, & "consumer church"
On Jackie Robinson Day, is racism still alive and well?
Choppin it up, Ep. 5: #AlfredOlango, Nat Turner, Luke Cage, blacks in Hollywood, and boycotting inju...
Waking Up to Women's Oppression Via the #metoo Movement